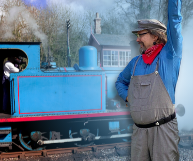 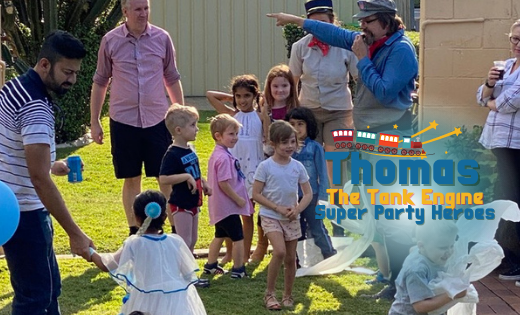 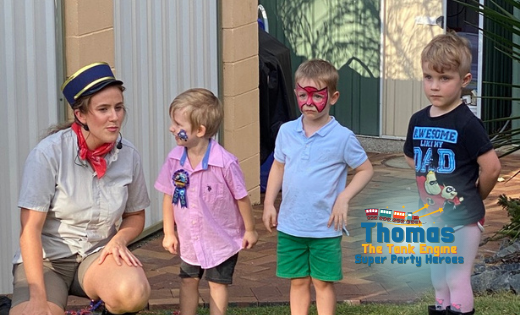 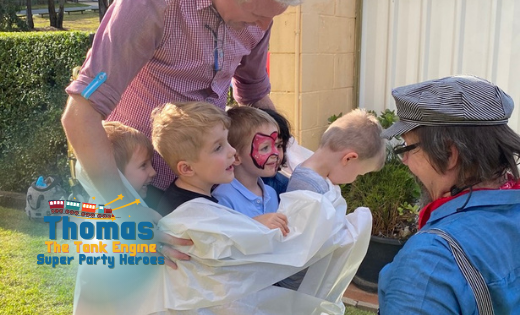 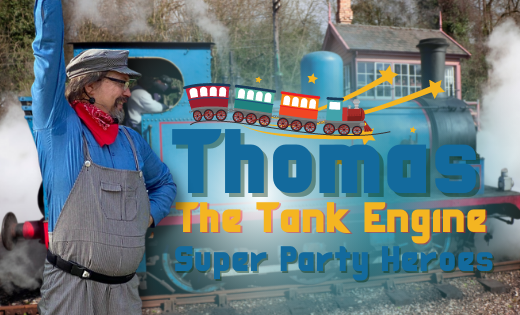 If your little one loves Thomas The Tank engine as much as everone else does in Brisbane and on the Gold Coast then our Thomas The Train party packages are a definite win!

If you have a fan of Thomas The Tank Engine looking forward to a birthday, you can get his party on track to be his best yet by hiring one of our Entertainers as a Thomas The Tank Engine Train Driver. You can find everything you need to make it a successful party from our packages, so no matter which of the thomas trains is your child’s favorite, you can absolutely make the kids eyes light up on their birthday party.

This is a fully integrated show jam-packed with Thomas The Train Party activities having your performer dressed up as a Train Driver and will bring the best experience for the children to get into lots of activities keeping all the kids Busy for a duration of time and make the adults pleased that they have experienced such an AWESOME entertainment.

Here’s our one hour show breakdown below:

10-20 minutes Fun Train Party Themed Games
Your entertainer will teach them survival skills such as how to run super fast in order to catch Thomas The Train from driving itself, How to hide from the hot steamed train from the station in Alresford and how to dodge and weave quickly so that they can outsmart the bad trains who might go after them.

20-35 minutes Rescue Me!
The children get wrapped in a huge ream of paper while their other friends have to save then in order to learn how to be find a way out from badly built trails. Sometimes we even have to save the mummies and daddies!

A giant rope comes out to play tug of war in order to their their strength in case they need to fix Thomas The Tank Engine when some of the parts need repairs.

40-55 minutes Parachute Of Colour & Balloons
A Giant, colourful parachute is flung out across the crowd – This is a real eye cather and great photo opportunity. Your child will get spun around slowly held by his best of friends as they sing happy birthday. The Train Driver will then play all sorts of games with the parachute such as bringing the chute up and down as they lie, squealing with excitement, face up, underneath it, pretending that they are underneath Thomas The Tank Engine. Fun Train Party!;

Finally, The Children are now trained in the special art of defending themselves with…. A tickle sword! These bright coloured balloons are given out and create a great photo with smiling faces from the children as they receive one. However, before they are given these wiggly tools, they have to answer a lot of questions about Thomas The Tank Engine. “Why is Thomas The Tank Engine able to talk?” , “How Thomas The Train was built””, “Does Thomas The Train Run out of Gas at all?” – They find out the special ways to yield their silly weapon to protect themselves agains the Evil Train Drivers. There is the Chop, the slice, the wiggles and the Tickle! After the amazing war between the good (children) and bad (dads).

55-minutes to 1 hour Singing Happy Birthday & Prize Giving
After all the training to become Train Drivers Each child is given a sticker and a magnet as a commemoration of completing their training to become a new Train Driver of Thomas The Tank Engine. Time to sing happy birthday to the most important person at the party – your child! The themed performer will gather all the children and adults around as you grab the lighter and camera. The entertainer manages the crowd to make sure that you have the perfectly arranged crown for your special photo of your child blowing out their candles surrounded by friends and family. The entertainer then leads them into the famous song and finishes with cheers of HIP HIP HORRAAY! Then, it is time for souvenir photos with their favourite character. The party continues with everyone eating party food, the cake gets whisked off to be cut up and dished out as dessert. Your birthday party will be a big hit with everyone talking about it at school.

EXTRA 30 MINUTES? Pass The Parcel & Wand Making
You can even get your themed party entertainer to perform a 1.5 hour show from beginning of the party as the children arrive and meet your child. Your party entertainer will ensure more fun games are played, including “pass the parcel” and even organise a wand making workshop! 30 minutes of fun and games will be Just $70+GST.

(BOYS – Extra BALLOONING)
Balloon Replacement Time – Extra Ballooning
Only for $70+GST you will receive 30 mins MORE of entertainment as your Brisbane birthday party performer whisks his magic to create balloon animals in just 30 minutes!! Each girl and boy will leave the party with balloon sword or flower or balloon dog or space gun! Now that’s great Value! This is a great add-on for the show as a lot of the balloons in the Tickle fight burst during combat. This way, everyone gets to receive another balloon! Bargain!
We are available for any questions that you have. Phone us!
07 3555 8019
or
Contact SuperSteph