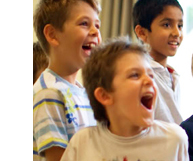 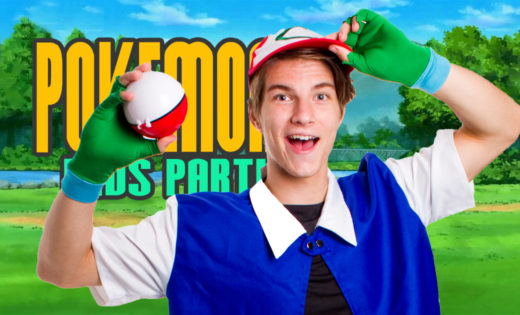 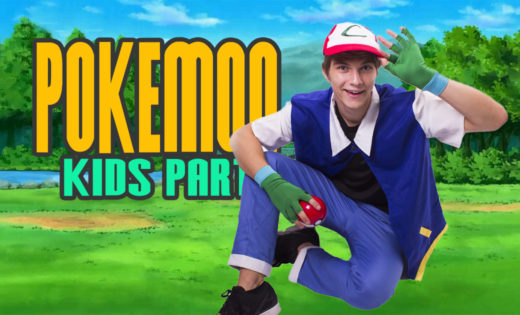 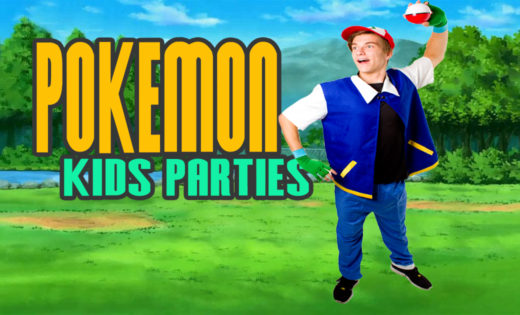 Hire the best Pokemon Performers from Super Party Heroes to host and embark a Pokemon Birthday Adventure for your boy or girl. This is a special training for the birthday child getting ready for the elite pokemon war to “CATCH’EM ALL!”

Celebrate your child’s success at defeating the Elite Four and becoming a Pokemon master this year with a birthday party that will catch the attention of his or her friends. Our Pokemon Party theme features a bunch of different party activities, many of which your child has surely done while playing the game.

Our show breakdown is as follows:

0-10 minutes Meet & Greet
After winning the Elite Battle from the pokemon Colosseum and won, Your Ash Poke-Performer will run through Gale Forest to meet his “mini aspiring Pokemon Masters”. Your Pokemon Entertainer’s first mission is to find and guess who the birthday child is…. The Party Host gets this wrong in so many silly ways causing all the mini poke-masters laugh and giggle. After finding out who the birthday boy is. The children will then discover that they are going to be turned into one of the best characters from Pokemon collecting poke-monsters and beating Team Rocket guided by your very own performer dressed up as your child’s favorite teen character from the Pokemon Cartoon Series, ASH!

10-20 minutes Fun Themed Games
Your entertainer will put all the children to a special training that leads them into enhancing their super fast reflexes to escape and beat the Rainbow Rocket. Your entertainer will teach all the mini aspiring Pokemon Masters surviving skills as to how they could think and run super fast to finish a Pokemon quest. How to dodge and strife really quickly as to how they could catch Pokemon monsters in the forest of Ellie (your backyard) and capture team rocket to stop them in stealing Pokemon.

20-35 minutes Rescue Me!
Your booked entertainer will of’course teach them how to rescue gale villagers by putting the children into a rescue training where half of the children will get wrapped in a huge ream of paper and their other best of friends have to save them using all the passive and active skills they’ve learned from the previous training games.

Your Host also has to make sure all the children will have sufficient energy to defeat evil masters – he brought a big giant rope that will come out to play Tug Of War in order to test all mini aspiring Pokemon Masters stamina, stability and strength.

40-55 minutes Parachute Of Colour & Balloons
Your entertainer dressed up as Ash finishes the fabulous show by spreading a Huge Colorful Chute captured by Pikachu and his friends. The entertainer will then play all sorts of games with the colorful gigantic parachute such as bringing the chute up and down as they lie, squealing with excitement, face up and it will be used to surprise and sing a special song to your Birthday Boy or Girl.

Now that your boys and girls are fully trained to become a Pokemon Master, they are now ready for an adventure with a tickle balloon swords made by your performer that they will need to use as they work together to defeat team rocket’s minions (Daddies)!

55-60mins: SINGING HAPPY BIRTHDAY AND PRIZE GIVING
At this point, we can say that the Training is now completed, your Pokemon host hands out birthday party give aways. All mini poke-masters get to sing happy birthday to your special child before your host says goodbye.

Balloon Replacement Time – Extra Ballooning
For only a little extra you will receive 30 mins MORE of entertainment as your Brisbane birthday party performer whisks his magic to create balloon animals in just 30 minutes!! Each girl and boy will leave the party with balloon sword or flower or balloon dog or space gun! Now that’s great Value! This is a great add-on for the show as a lot of the balloons in the Tickle fight burst during combat. This way, everyone gets to receive another balloon! Bargain!
We are available for any questions that you have. Phone us!
07 3555 8019
or
Contact SuperSteph